I destroyed my legs this weekend. Absolutely tore them to shreds. I used one excursion point (we have 18 of them to spend on excursions that appeal to us) to go on a 25 mile long hike called the Crow Pass Trail. It started off with a 2,300 foot elevation gain in a few miles, and then kept up a slow but steady decline for the rest of the trail. An outhouse along the way… (Photo by A. Otto)

The hike was one of the most beautiful I have ever been on and I cannot wait to do another one like it in the near future. We began at the trailhead which was at the end of a 10 mile long dirt road outside of a small town called Girdwood. We made it about five minutes up the trail before Andrew started to realize he had not packed his bag efficiently. We dumped it out, and helped him sort out some of the problem. 1 ½ pounds of Fig Newton’s, a box of chocolate wafers, some hot chocolate packets, a box of tea, a set of five solo cups, flip flops, extra bowls, and a roll of aluminum foil later, he was set to go.

We saw a mountain goat right away hiding up on the rocks, followed shortly by a girl who had lost her dogs and was frantically searching for them. As we approached the pass, the amount of snow on the ground continued to increase until eventually we were in the middle of a snow field many feet thick.

On the other side of the pass we were presented with a panoramic view of mountains, glaciers, a river, and snow fields. Stunning. We hiked down, cutting across snow drifts until we came to the bottom of a 100 yard long snow hill, which we promptly scampered up. I skied down on my giant size 13 skies (aka shoes) and Andrew went face first on his poncho. Casey and Patricia doubled up on Casey’s air mattress and went down proper sled style.

The rest of the day was spent hiking in perfect temperatures through chest high wild flower fields and slender trees along a snow melt river on the floor of the valley. Eventually our trail met up with another valley, and we came to the river we had to ford. Have you ever forded a river? Because none of us had, nor had we really researched what we needed to do. We ended up stripping down to as few clothes as possible (for Andrew, it was just boxers…) and putting as much of our stuff in plastic bags as we could. We put on our shoes and stepped in. Coldest water I have ever been in. I could actually see the glacier that this water was coming from. 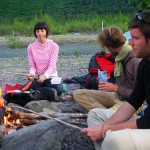 By the time I made it to the far side, the only sensation in my feet was a needling pain. It faded soon enough and we built a fire on the far banks to dry out our shoes. The water never came too far above our knees, so the crossing was much less intense than we thought it was going to be. We had gone 13 miles and could go no farther, so we put up camp and got out the dinner materials. We all had a good meal from pasta and Sausage, except Casey, who is a vegetarian.

We went to sleep worn out, but ready to hike 12 more miles in the morning. We didn’t realize how different they would be.