When we woke up the next morning it was raining, so we stayed in our tents and drifted off to sleep again. We were worn out from the day before, and the rain just gave us an excuse to sleep a little more. Our 8:30 am wake up turned into 11:00 am. As we were getting ready, we realized that our water situation was critical. I had less than one liter left, and most of us had less than that. The water that was flowing near us was gray with glacial silt (rocks that got turned to dust by the power of the ice) and we didn’t really want to drink it. We decided to postpone breakfast until we found some cleaner water.

30-40 minutes of hiking brought us to Thunder Falls, a fast moving stream coming out of a gorge to our right. The water here was still silty, but not nearly as bad. At this point, we would have drank anything, more because we were nervous about not having water than because we were dehydrated or even close to it. We set up my stove and boiled the water for a while before adding in our oatmeal. Casey had some iodine pills and we used a few of them for six liters or so of water before moving on. 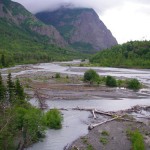 Looking Back (Photo by C. Fenton)

Casey and I kept finding ourselves moving faster than the rest of the group, so in an attempt to reach the visitors center at the end of the trail before it closed, we decided to go on ahead. The walking here was again completely different than it had been before. We were following the river bed most of the way, and we would fluctuate between wide open rocky flats and close underbrush on the side of the valley. Every now and then we would come to a stream that needed some creative balance to get across, or an open washout area where we had to pause and look around to find where the trail resumed. As we got closer to the visitors center the trail began to widen and smooth out. Before it had been a footpath sometimes overgrown on both sides to the point you couldn’t see your feet through the shrubs, now it was a veritable highway. Six feet across and well traveled. We came upon our first official trail map sign, and realized we were close. This area was full of white bark trees and lichen covering the ground. It reminded me of the Lord of the Rings a little bit.

Casey and I were moving pretty fast at this point, and we passed a good amount of people. Many who were doing short day hikes asked we had come the whole way from Girdwood, and wanted to talk about it, but we just smiled, said yup, the whole 25 miles, and kept going.

To preface this next part, you need to understand that we had left our car in Girdwood. We then hiked 25 miles away from Girdwood, but the only roads back meant it was about a 50 mile trip back. We were going to hitchhike it back to our car, which is why we were in a hurry. When we got to the visitors center it was literally closing up after a meeting of the advisors for the state park. We talked to the people there and got a ride out with the last guy leaving towards Anchorage, an older British gentleman named Brian. He and Casey knew a lot of the same things and people in Alaska, so they had a good conversation on our ride. Unfortunately he dropped us off on the worst road to get a ride on. It was strip mall, family restaurant, and commuter central. If you are from Atlanta, imagine Roswell Road.

We waited a while, and then finally called a cab to pick us up and take us farther down the highway to a good hitching place. Not too long after we got out of the yellow cab, and guy in a rented SUV pulled over and picked us up. He was an Alaska native who worked on the pipelines up north, and was on his way to see his mother for the first time in three years. He took us all the way to the Girdwood turn off. From here we couldn’t quite figure out the best way to get where we were going. Our car was up the road near the actual town, but it was at the top of an 11 mile dirt road that not many people used. We hitched a ride up with a Mexican family who was showing one of their relatives around and they took us up just past a restaurant called the Double Musky. This place was happening. Casey said it was one of the nicer restaurants in Alaska, which was odd because it was so far up this dirt road. Casey stood outside to see if he could find a ride, and I went in to talk to the bartender and see if she had any friends that we might be able to bribe into taking us up the hill.

While I was asking, a girl (Kim) who was at the bar spoke up and said that she lived at the top of the hill and would take us up when she was done eating. I grabbed Casey from outside and we sat down for a beer. Kim and her friend finished, and then told us that we should leave because it didn’t look like he was coming. We asked who was he, and she said that Harrison Ford was supposed to be eating at the restaurant that night. They walked out the front and we went out the back to grab our bags. When we came around the side of the restaurant, there was a silver SUV parked in front, and Harrison Ford and Calista Flockhart got out. He had a bottle of wine and looked very, very old. Kim went up and shook his hand, welcoming him to Girdwood, while Casey and I stood behind her trying to figure out what was going on. We didn’t recognize him at first. The was also an extremely large woman who had enough make up on to paint a house. She was almost yelling at Harrison that they had the same birthday, she must have said it about 15 times. She finally left, and we piled into Kim’s car for the ride up the hill.

Kim had a purebred German Sheppard named Echo in her car who was trained as a rescue dog. She had me hide behind a car in a parking lot and Echo found me, ran back to her and led her to me. Pretty cool. 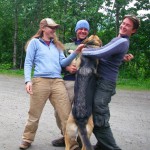 Casey and I got our car, thanked Kim, and headed back towards Eagle river to pick up the rest of the guys. We got a call saying they had found a ride and were headed our way, so we parked in a gas station and waited for them. It turns out that they got to the visitors center about three hours after us and it was closed, leaving them stranded with no cell reception. Luckily someone else showed up at the center, and they had arranged to be picked up, so they got a ride out with them.

We arrived back at home at about 1:30 am tired, but incredibly glad we had done the trip.