So much to go over. This has been one of the longest periods of time that I have gone without updating… I think.  So I am back in Katmandu, seeing it for the first time really since I was only here for less than 12 hours the first time. Which is where the story begins.

I left Bangkok and got to the airport for my flight in plenty of time, but encountered the usual amount of annoyance and harassment from the security people. I had bought a tube of honey in Thailand that I wanted to take with me up to Everest, but it was 130 ml, and the maximum allowed container is 100 ml. I drank 30ml of honey in front of the guard after she said that that would make it ok, but her boss came over (after I drank it) and said no go. So I walked around the corner, put the tube in  my pocket and returned, telling them I had thrown it away. The honey made it on the plane.

The ride was uneventful, but the views of some of the mountains were incredible. I didn’t see Everest sticking out above the clouds, even though I made sure I was sitting on the correct side of the plane. Upon landing, all the Nepalese on the flight began clapping and cheering because we made it safely. This did not make me feel good about the flight I had just made!

We landed around 5:30pm (Katmandu is 1 hour and 15 minutes behind Bangkok, the 15 minutes is so they can be “Unique”, something very important to their country as it is slowly becoming northern India.) and Arjun was there to pick me up. Arjun is a guy I met through Couchsurfing, and he runs a trekking company. Before I met him however, I walked through the  darkened airport, where they only had lights in about half of it because of power cuts.  I passed a coffin coming off the luggage truck and decided I had really entered the third world.

Arjun and I got into a beat up old car (I think it was a Datsun, circa 1982) and were roughly delivered to his home. It was raining, so I only got to see bits and pieces of the city as we passed by, but it struck me as a rat’s nest. Not in terms of criminal activity, but in terms of organization and cleanliness.  There is currently a gas shortage here because India is cutting them off so there are lines for gas that go on for two days. After a quick hello to his wife and child we ran to the backpacker / shopping / main area of town to buy some warm clothes and a sleeping bag. I got a full outfit of North Fake gear, including socks, thermal underwear, windstopper jacket, outershell, goretex pants and gloves and a fleece hat for US $ 127. Gotta love trademark and copyright laws.  The gear is of course fake, but the quality is very close to the original.

Packed my bag that night and got ready to leave at 5:30am the next morning.

Let’s see if I can pick the speed up a little. 5:30am taxi, double prop plane, 12 passengers, 30 minute flight from Kathmandu to Luklah. Cool, now I am in Luklah.

While waiting for the plane in Katmandu I met a woman named Sue from Australia that had a very interesting story, and ended up changing my whole trip. She was bringing medicine to the father of a Nepali woman about two hours walk from Luklah. She had taken the Nepali woman under her wing 10 years ago and brought her to Australia where she is now the head cook at the hotel Sue owns. He real father was now sick and dying of cancer, but could get no medicine stronger than ibuprofen in the mountains. Sue was meeting her in Luklah and bringing in morphine and other supplies.

I helped Sue unload her luggage when we arrived (and there was quite a bit of it, mattresses, fresh food, clothes, etc…) and met Lakba, the Nepali woman. They were going to start trekking the two hours to Gaht, a small town on the way to Everest. I said I would help them as far as I could, and we headed out. When we got to the little town next to the airport, we stopped at a tea house 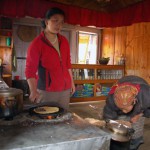 owned by one of Lakba’s relatives (of which I was to find out there were many along the trip) and had lunch. Fried potato pancake with nak butter. A nak is a female yak, and the Sherpas will laugh if you ever ask for yak cheese or yak butter, cause you can’t milk a yak.  Lakba also helped me get Nepali prices on some chocolate, cheese and a yak wool sweater for the trip.

Lakba’s cousin Pasang-Dawa was also there as a porter to help carry things. He didn’t speak much English, but was funny and good natured, although a little quite. By the time we made it down to Gaht, I was already feeling the weight of my pack and knew I was in trouble. After talking to Lakba and Sue, they suggested that I hire him as a porter, and he agreed. We settled on 600rs a day, which is about $9 USD. I kept trekking for about another hour, and he met me the next morning at my tea house after taking care of what he needed to and getting his clothes. His bag was the size of a football, mine a linebacker. About the same weights as well. ( I later put it on a scale at the airport, and it was 12 kg, so not quite that heavy, but still).

He threw it on his back, smiled and off we went. We first had to stop by his monastery, for he was a monk and he had to get a blessing for the trip. This done we began heading up the mountain across bridges, trails and yak caravans to a place called Namche Bazar.

This is the most developed town in the Kumbu region where we were. Getting there took a good four or five hours of constant trekking uphill. We moved up almost 1000m vertically  in that time and I could really feel the lack of oxygen. Pasang-Dawa didn’t even notice. [photo]  Upon arrival, we checked into a lodge and got some much needed food. I got momos, which are a sort of vegetable or meat spicy mix packed into a fried bread pouch. Really good. That night there was a group of trekkers all my age coming down from base camp, and we all played cards next to the wood burning heat stove in the main room. It gets dark early in the lower part of the mountains, and a late night is 8 pm. 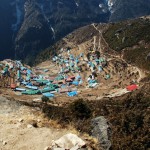 Up early for my acclimatization day, we trekked up to the Everest view hotel, which is a posh place that primarily caters to Japanese businessmen and their families. At this point I was breaking the 4500meter boundary, plenty high enough for my lungs and head to be telling me they were struggling to keep up. We went to two different little villages, saw the Edmund Hillary Hospital, and then went back to Namche. The reason for this is to encourage the body to build more red blood cells and start the process of adapting to less oxygen. Go high during the day, then sleep low. I woke up feeling much better, and we started the shorter, three to four hour trek to Tengboche. When we got there, we realized it had only taken us three hours, so we hoofed it for another hour and a half to Pangboche, a little further up the trail.

The Sherpa who owned the tea house I picked has been to the top of Everest six times and is going again in April. I talked with him for a while about his trips, then got a shot of him and his wife the next morning. I was the only one at the lodge, and Pasang-Dawa had gone to see his sister in the next village over, so the three of us (the Sherpa, his wife, and myself) sat around talking and reading all afternoon and night. 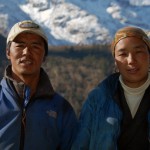 From here we headed up yet again to Dingboche, another small village of about 30 homes / lodges. We originally went to some of Pasang-Dawa and Lakba’s relatives lodge, but it was very expensive, so I switched to a different one, where I met some Germans, Chris and Tommy, who were as sick of being in lodges by themselves as I was.  They were both medical students and had been in Pokera for a while. Chris made a small version of the board game “Sorry” out of his medical kit using tape and what not and we played all evening. 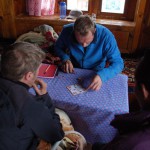 They had a guide, but were carrying their own bags. The five of us, being Chris, Tommy, Me, Pasang-Dawa, and Untrep (I think…) who was their guide all went the rest of the way to base Camp together.

I was planning on another acclimatization day in Dingboche, but the student doctors said I would be fine, and I took their word for it.

Part two coming soon… and pictures to flickr as well!