We walked out our front door to the gas station down the street to pick up gas for my camp stove. We had already packed up some pasta, soup, oatmeal and snacks from the house so we didn’t have to pay for food. We wanted to head north, and spend very little, so we decided to hitchhike. Hitching in Alaska is a pretty common event, as there is one road heading north and one road heading south. Before we even made it back to our house from the gas station we got a ride from a guy who was headed about an hour north. He was an air traffic controller in Homer but lived farther north. We rode with him and made small talk but nothing much came of it. He dropped us off in the middle of nowhere (actually, just north of what passes for a town here called Clam Gultch). We walked to a little bar/restaurant that claimed to have over 22,000 baseball hats and to be certified in the Guinness book of world records. There were no hats. Well, not many. Just a few around the ATM machine.

We came back outside and after just a few minutes, a guy slammed on his brakes and almost threw his truck into the ditch trying to stop so fast. Almost as if he just decided to pick us up as he was even with us. We threw out stuff in the back and jumped in. Jim turned out to be a great guy. He worked out on the oil rigs and had the day off, and had passed one hitchhiker earlier on, and felt bad so he picked us up. He said he used to hitchhike and remembered how fun it was. We didn’t have to talk very much with him as he could continue the conversation along by himself pretty well. He took us about 20 minutes up the road to Seldotna, the nearest semi large town, where he dropped us off at the Fred Myers (like a Wal-Mart). We needed to buy bear mace in case we came across bears, and I wanted to get good Coleman fuel for my stove, since it had only ever burned gasoline before. Before we got out, he offered us some of his beer, and $20.00 cash. We took the beer.

After we left Fred Myers, we waited at the corner of the parking lot for maybe five minutes before a guy stopped off for us again. He was around 28, and headed back to Anchorage for his days off, so we could ride as far as we wanted with him. We were originally going to Cooper’s Landing to camp near there, but when we pulled up we noticed that there were a hundred or so people fishing the banks of the stream and they all had RVs. We decided to move on. Walter had stopped in Hope, AK on his way down because the guy he was riding with wanted to see all the small coast towns, and he thought it would be a good place to go. Oh, I didn’t mention that Walter is a narcoleptic Dutchman with waist long blond hair, which made the trip a little more interesting. He kept nodding off during conversations so I would have to fill in, but then we just told them what was up, and they thought it was funny.

We got dropped at the entrance to the 16 mile road to Hope, and quickly got a ride from a nice old guy who had lived there forever. He took us around for a tour of the town, then suggested a little trail outside the community. (Hope has just over 200 people) We hiked down the trail and found a little site next to a stream that was about as perfect as we could have wanted. We were a little nervous about the bears, so we strapped the bear mace to my belt, but didn’t open it all the way so we could return it if we didn’t use it. The first guy we got a ride with had said no worries, just make a fire. The second guy told us we should get some bear mace, and the third guy told us we should have a gun. Right after he mentioned this, we saw a giant brown bear lumber up to the side of the road then turn back into the woods.

I switched the gas in my stove to the Coleman fuel, and we boiled water and cooked cooked the pasta. We mixed in salami and cheese and made our selves a feast. After setting up camp we walked a few miles into town to see what it was all about. Not much apparently, but the view was beautiful. Walter went to take a needed nap on a rock, and I went down to the water to skip rocks. The rest of the night was spent talking around the fire before we called it an early night. 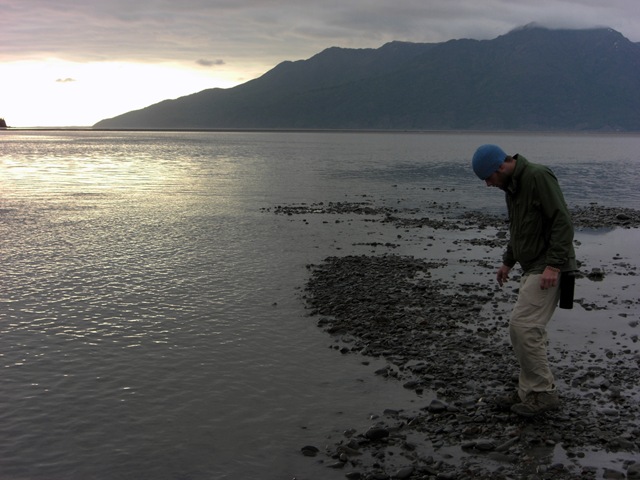 We woke up around 7:00 am, but fell back asleep until 10ish when we cooked up the oatmeal and headed out again. It took us a while to get our first ride, and it was interesting. The woman who stopped had a dog in the back of her truck that was tied to a cooler. When we dropped our bags into the truck it spooked the dog, so it jumped out the back pulled the cooler with it. This spooked it even more and it bolted down the road. I chased after it and as it jumped into the ditch, I tackled the cooler, stopping the dog’s flight. She put the dog in the front, and we jumped in the back. She took us back to the main road where we got picked up by two girls headed down to camp out with some friends.

These girls took us as far as Seldotna, where the Fred Myer’s was. We went back in and returned the bear spray, which was $44 originally. We had never used it, so they just gave me a refund. There was a Taco bell here, and I was craving it, so I introduced Walter to his first Taco Bell experience.

We had been making great time so far, but we were on the wrong side of town to hitch out of, so we walked through the place to get to the other side. On the way we heard someone call out from a parking lot, and a man who was cooking kettle corn in a booth was waving at us and he tossed us a big bag of kettle corn. Cool. The people here are so nice it is amazing.

We waited a while, but finally got a ride with a girl who was late for work, but had heard from friends of the first two girls that dropped us off in town that there were two cute (her words, not mine) hitchhikers making their way through the area, so she stopped to pick us up. She, randomly, took us back to the same place that was supposed to have 22,000 hats where she works as a bartender. She said it doesn’t because they renovated, and now most of them are on ebay.

From here, our luck went down. We walked for a while because no one was going by, and walking makes the time pass. Eventually a guy in a yellow sports car stopped and we jumped in. He had his daughter in the car and seemed alright, but goofy. We soon realized he was hammered drunk. He was going off on a wild tangent and both him and his daughter, who was an emo, pierced teenager, were drinking to celebrate Father’s day. We needed to get out of this car quickly. We asked him how far we were going, and he said to the next bar. Asking him to let us out could have made the situation much worse if he decided not to, but luckily we knew this was only a few miles away. When he pulled in, we got our stuff out, declined his offer to  come drinking, and walked up the road. About an hour passed before we got our next ride, and it was from two girls who passed us, but made eye contact and stopped farther down the way. The only took us about 15 miles before they were leaving the main road, so they dropped us off. We must have waited about another hour and a half to two hours before we got our next ride. It wasn’t that so many people were not picking us up, just that we were only getting six cars every 20 minutes.

Finally we got picked up by a large, large man and his tiny, tiny Asian wife.  They were going to Homer, so we had our last 40 miles done. 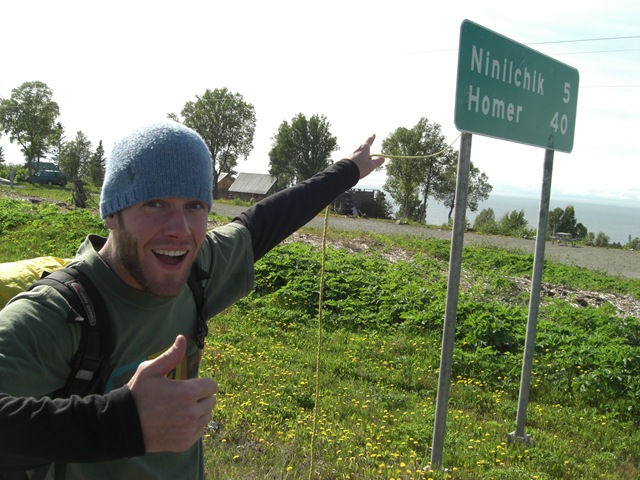 The trip was a lot of fun, and we got to meet a ton  of local talent. The only other time I have hitchhiked was when my bicycle broke down in California, so this was a good experience. Walter has hitched over 6500 km in Europe, so this was nothing new for him. I will definitely do it again, as the entire weekend was amazing, and cost a total of $10.00 because we ate at Taco Bell. If you include the free beer we almost broke even. It put me back in touch with reality, which is easy to lose sight of when you live with 20 people in an isolated environment for a long time.

More Photos From The Trip