Kathmandu has been a unique experience, simply because I had no plans after Everest. While I was in South East Asia, I decided to head to Everest, but failed to think about what I would do for the weeks I had in Nepal afterwards. I have spent the past week hanging out with the German guys, or working online for some clients here. I have built a webpage for the hotel I am staying in, and have gleaned myself free accommodation. I am also working on a web page for Arjun, the guy from Couch Surfing who helped me set up my plane flight to Luklah. Unfortunately, internet here is unreliable, and slow at best.

Yesterday was different. Yesterday was Holi, the Festival of Color. I awoke to the sounds of screaming and laughter in the streets and from the rooftops. The day was a national holiday, so very few places were open, and everyone was running around the streets, throwing colored powder, water, and paint around. Some people had painted themselves completely silver or gold. If you remember the Pre-game parties that go on before college football games, you have some idea of the atmosphere. 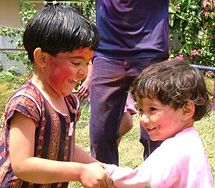 I had known that this event was coming up, and the children had been leading up to the big day all week by throwing water balloons around at unsuspecting women. On this day, it turned to all out warfare. Buckets of water were getting dumped off the roofs onto people below, balloons full of colored water and paint found their way across alleyways and crowds of people to hit their mark. The main target was blond, foreign women. Several times I saw them get mobbed with people, and come up completely covered in red or purple paint. Other times I saw their boyfriends or significant other  fighting the Nepali guys off. I talked to one woman who said she almost started a fight because she was getting groped so badly, and she had decided to spent the rest of the day inside.

I ventured out to get some food, and ended up covered in red paint, throwing balloons around and getting completely soaked. I had originally brought my camera out, but that proved to be a bad idea, so I only have a few photos  of the day (which I cannot get to load onto  my computer because it is a piece of crap). I saw some people who had wrapped their cameras in full plastic protection, and were attempting to keep them from becoming useless hunks of waterlogged electronics. The girls who run my guest house were really getting into it, and we had a huge water fight on the roof of the hotel, punctuated by dropping water bombs off the roof onto the people five stories below.

I bought enough food so that I wouldn’t have to go back out, and spent the rest of the day hanging around the guesthouse, eating pastries and watching the chaos outside.

Tomorrow the plan is to rent a motorcycle and head out to some different areas of the country. Should be interesting.