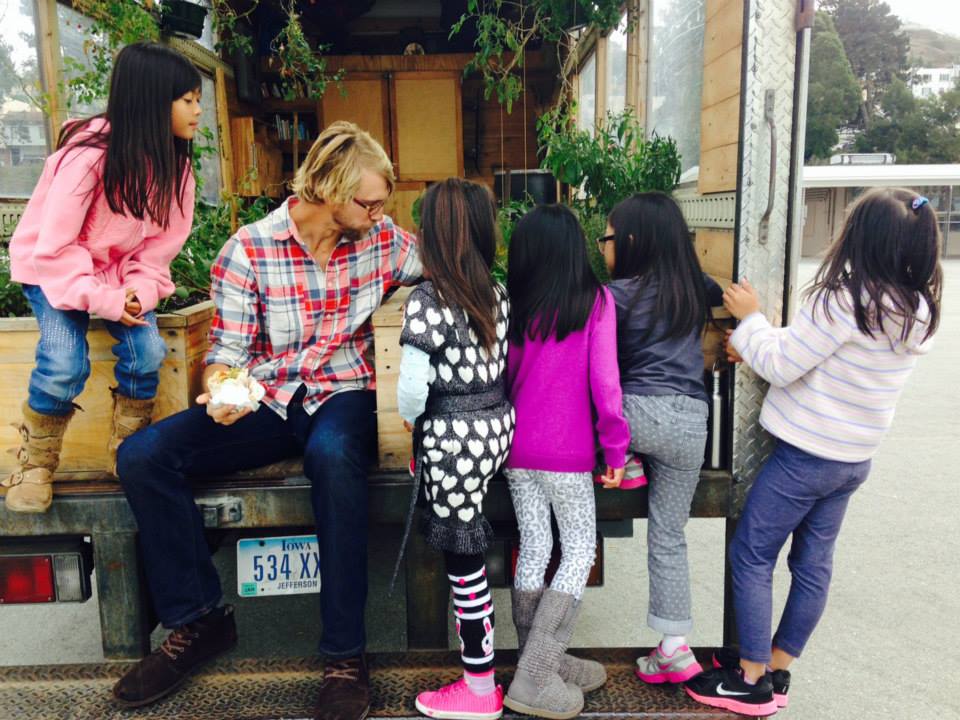 Justin runs Compass Green — a school garden on wheels.  It is a fully functional greenhouse built in the back of an 18ft. box truck that grows vegetables, grains, and herbs and is powered by waste vegetable oil.  He travels the country teaching students. I talked with him about some of the ins and out of his business.

Ben Hanna: How many students are you serving a year right now?

Justin Cutter: This year, I taught 10,000 students, which is my goal since I started Compass Green – to be teaching 10,000 students with one truck per year.

Ben Hanna: How did the idea for Compass Green kick off?

Justin Cutter: I had been working with John Jeavons, this world-famous agriculturalist, to help start a program called the Green Belt Team with the goal to train people to go to developing nations and start sustainability centers.

After doing that, I felt like I wanted to do something for agriculture in my own country. I started traveling to colleges and teaching workshops on Biointensive sustainable agriculture, which is just a kick ass system that is super productive and super sustainable.

When I was part of that I would also give this presentation on our global food situation and what our choices about food are doing to our bodies and our planet. How it can be incredibly positive, but right now we’re on a pretty bad track.

Those would be open to the public and some were very well attended. There are all people who are already interested in sustainability and I saw pretty quickly that I was falling into these traps of preaching to the choir, which is a very enjoyable thing to do but not very productive. I realized that if I’m actually going to make any difference in sustainability in the US, then I would have to reach the people who:

1) Did not have access to this kind of thing.

2) Who were also “just” interested… The people who saw a poster for a talk about food sustainability or anything with the word ‘sustainable’ in it. People who would just not want to go because it would trigger some kind of trippy tree-hugger sentiment that they didn’t want to be a part of.

Around that time, one of my old high school buddies called me with this idea to turn a truck into a greenhouse. He was thinking of going to farmer’s market and stuff like that and knew that I was in agriculture and so that’s why he brought it up to me.

To me, I instantly felt like it was a fantastic idea but instead of using it as a way for us to have an adventure in itself and it seems like an amazing way to have an adventure and really reach people who would not, otherwise, be exposed to this kind of education and teach them about sustainability.

The truck would serve both as a vehicle to get to those places but also as a really cool interest piece that would capture the attention and imagination of the audiences, regardless whether they were already interested in gardening or sustainability or anything like that.

From there, we just ran with it. Started up in Brooklyn, New York in 2011.

Ben Hanna: You guys actually started by funding yourselves with a Kickstarter, right?

Justin Cutter: We did, yeah. Kickstarter was very crucial for us. We didn’t have any money and we weren’t interested in going into major debt to get us off the ground so we did a Kickstarter campaign and were successful in meeting our goal of $27,000. That was enough to buy the truck and retrofit it into a mobile greenhouse that can also be run off of vegetable waste vegetable oil.

Ben Hanna: How are you funded now? What’s your primary source of income?

Justin Cutter: Right now, the primary source of income is corporate sponsorship. We work with a few corporate partners that are supportive of our mission and would like to see it extend. Secondary funding comes from small grants. The last little bit of funding every year comes from individual donations. As soon as I have enough time and a team of people that can just dedicate time to it, then we would be going after some of the bigger grants.

Ben Hanna: I know right now you post on Facebook about how you’re trying to find interns before each tour that you do. How have you gone about finding the right person to offer an internship to? Who is the right person for your tour?

Justin Cutter: We’ve found a few on Omprakash.org, which is a really amazing organization online that gets volunteers to connect with volunteer opportunities around the world. I was reading the application of a guy from Portugal, who found us through that. Also Facebook and people passing it around. Most of the interns have actually come from those just through word of mouth, somebody who knows somebody who knows somebody would be interested in this kind of thing.

The right kind of person for the internship is somebody who already knows something about sustainable farming and has a strong interest in Education. Also, a little bit of the activist standpoint that education is a much more sustainable form of activism. We really are trying to change how farming is done in the US and we are doing that through education.

A typical intern would be for us recently out of college, looking to gain more experience. They know that they want to work in a benefit company that is a non-profit organization in the field of sustainability or agriculture. Someone who wants to get involved in education, and to learn a little bit more about how non-profits are run. Also, somebody who’s really outgoing and down for an adventure because that’s a big part of it as well. That’s part of the thing that really draws people to our project.

Justin Cutter: When it first began, it was just wherever the heck we wanted. We started in New York and said, “Let’s have an amazing educational road trip adventure  in New England over the summer.” Going to summer camps, down the East Coast in the fall, and across the south in the late fall. That was our first tour.

Ben Hanna: Would you just call a summer camp up and say, “Hey, we are driving around, can we stop and give a talk to your kids?”

Justin Cutter: That’s exactly what we did. This is the area we wanted to be going through because our friend has an awesome beach house that we’ve always wanted to visit. Let’s see what summer camps are in the area. We started off like that and went where we wanted and looked up places in the area on the internet.

Since then, I now have lots of schools reaching out to me. I’ll look out at the schools that seem most interesting and see if it corresponds to an area that I would like to be teaching in.

I’m definitely susceptible to being won over by a school that says they really need it. If one school is really good at that, then I’ll build my tour around a couple of different schools.

I’ll look up the States database for FRPM or Free Reduced Price Meals. That’s pretty much how you figure out how poor a school is.

I’ll look for a school where over 60% of the students getting free meals, which means they’re below the poverty level. I’ll call them and follow-up with an e-mail. I’d say doing it that way, maybe 1 in 4 schools actually get back to me because most of these don’t have a lot of resources or are  also really strapped for time. It’s hard to even get anybody to respond.

Ben Hanna: You’ve been at the Maker Faire recently and Disney did a feature… How has the publicity changed what you’re doing and the possibilities that you see in the future?

Justin Cutter: The more that we get out there, the more flexibility we have to choose where we want to go. It still happens that the majority of the schools that reach out to us are schools that have the resources to have somebody looking, paying attention and keeping their eye out for projects like ours. We don’t usually actually go to those schools.

Compass Green has always had a pretty good relationship with media. We did a bunch of interviews while we’re starting up in Brooklyn and some other online publications. From that, right away, some people were reaching out and contacting us. That did help direct our tour a little bit. Now that it’s really going out there with an article in Sunset Magazine and the San Francisco’s Chronicle, which I think kicked off an article in Tree Hugger magazine and then on to Disney.

It keeps getting out there more. More and more schools hear about it and start contacting us.

Ben Hanna:  Are you fully saturated now? Could you get to more schools even if they wanted you to come to them or do you not have enough time?

Justin Cutter: I could to go to more schools if they wanted me to come, but if more media came in, then I probably could spend my time a little bit better and not have to be reaching out to more schools. 10% of the schools that reach out to me are the kind of schools with the right demographic that we are really focusing on. If it goes from 200 schools reaching out to me to a thousand, then I’ve got a much better chance of not having to look up anything on States database and be making any calls, so that’s really useful.

Ben Hanna: Are you doing anything actively to help further your storyline and narrative in the media?

Justin Cutter: In terms of me reaching out to them, ironically, the only times that I’ve ever really done the PR job and contacted the local media in the places that we’re going to, it hasn’t been better.

Ben Hanna: How do you budget your time and what do you use to do that?

Justin Cutter: When I’m on tour, it’s really a 24/7 gig for 6-8 weeks at a time. You can never turn it off. When I’m off tour, it’s kind of similar to that. I think that anybody who owns their own business will be able to relate to not being able to turn it off because the to-do-list is always stacked up a mile high.

You’re never ever going to get to all of them. So somewhere in your mind, whenever you’re taking some down time for health or fun, you are thinking of all those things that needed to be done, especially today with our phones that connect us, it’s really tempting to be working on it.

I do make an effort to tie in some adventures to it to keep me refreshed and healthy… I use those surfboards that I’m carrying around with me or I use the rock climbing gear on the weekends. That makes me able to focus and do what needs to be done. When I’m not on the road, it’s similar, probably work more like 60-hour work week and try to take time to myself as much as I can.

Ben Hanna: When does your next tour start?

Justin Cutter: Next tour is going to start in the end of February in Southern California and run until the beginning of April.