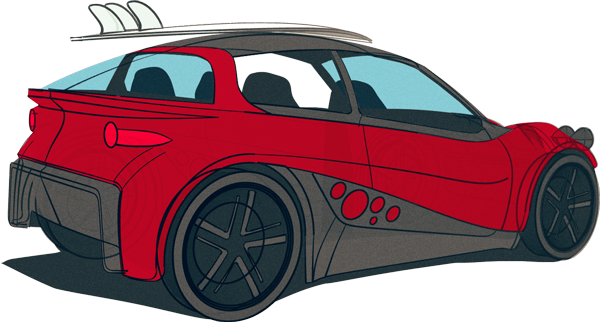 Some 12,000 hours ago Elon Musk announced that his company, Tesla, would

“not initiate patent lawsuits against anyone who, in good faith, must use our technology.”

Public interest in Tesla spiked, but not actually in electric cars in general. A year and a half later the Nissan Leaf and the Chevy Volt have not found widespread adoption. Charging stations are still the exception, not the rule.

However, shortly after Musk’s announcement, Local Motors 3D printed an electric car in 44 hours. Local Motors currently has Microfactory locations in 3 places, with plans to open 100 more over the next 10 years. At these microfactories they have a library of designs, customizations, and options you can choose from to print your own car on the spot. Starting at $18,000 with a highway legal version out in 2016.

They also have Mobilabs, which are fabrication plants on trucks roaming the country, that can repair and upgrade the Local Motor cars onsite.

Local Motors could put one of the mobile labs next to every Tesla Charging Station. They have the ability to share the same battery technology, so customers could get a fast charge, or have a new custom molded headrest printed out while they wait for their car to charge slowly. This is also revenue stream for Tesla as they can also charge for the electricity. (Only Teslas get free charging for life.)

I can see entire lines of customization like never before. Companies will sell custom mirrors, visors, steering wheels, and the ability to theme cars for different seasons.

Better yet, taking a leaf out of Google’s playbook these cars can be adapted to be self driving with a simple add on that they are already demoing.

With the amount of money moving into the self driving car market (Apple, Google, others) and now with Chinese billionaire backed Tesla competitor Faraday Future there seems to be no sign that removing cars from the road is going to be part of the near future. However, some of the most interesting public facing technology is focusing on changing our relationship with cars, roads, and driving. The day when we view cars as “mini public transportation vehicles” is not that far off. In a case where demand for rides will surge (Olympics, World Cup, etc…) more cars can simply be printed for the event, then distributed to other, initially less profitable locations. Instead of waiting for a bus, you pay for your ride in an Uber with your Metro card.

In 2006 Cory Doctorow released a short novella (Full text for free) that featured local printing as a normal part of daily life. In 2010 he flushed out the idea with “Makers” — a book I highly recommend that you can download free from that link! In that story he explores what the world would be like if local manufacturing made it impossible to enforce copyright

Five years later, I like where we are headed. Now if only my entire refrigerator worked like these do.